But I don’t agree with some of the arguments the academics made in the letter, and I want to talk about this, even though I’m pretty sure I could get slammed for doing so.

Rather, I’m arguing that treating smoking like it’s solely a personal choice is wrong, that personal choice exists for both smoking and obesity, and to deny that is to take away people’s autonomy.

First off, the things I agree with.

Things I agree with

I completely agree. Most (possibly all) of the studies associating BMI with health outcomes are observational, not causal. From these studies, you can’t say anything about whether a high BMI causes cancer, or whether something else entirely is going on.

BMI can’t be randomised in a study in the same way a drug or other treatment can. You could look at randomised studies of treatments for obesity and see if they affect cancer in the long run, but that’s expensive, difficult, and probably not ethical – you’d have to not treat one group of people, who initially wanted treatment, to see if they were diagnosed with cancer more frequently than the group who were treated. Oh, and this only tells you if the treatment affects cancer risk, not BMI itself.

You could also look at genetic studies, which can be thought of as a natural experiment, since bits of genes are distributed randomly at conception. You would look at the bits of genetic code causing changes in BMI, and see if they also affect cancer risk, and any other outcomes. Here’s one.

Genetic studies probably give more of a causal estimate than non-genetic studies, but they aren’t free from bias, e.g. population stratification, family effects and pleiotropy. With complex, multifactorial outcomes like BMI, it’s difficult to be completely sure whether the effects you’re seeing are from BMI, or from some other process. It’s still a lot better than non-genetic observational studies though, hence the “more causal” estimates.

The cited research isn’t actually what I was hoping for, which was a study showing that telling people obesity is bad doesn’t affect people’s BMI in the long term. The research was more about people’s perceptions of obesity and “self-efficacy for health behaviour change”. However, I agree that telling people that obesity causes cancer is extremely unlikely to change people’s BMI. I don’t believe that many people who are obese believe obesity has no health consequences, or that telling them there are consequences will change either behaviour or outcomes.

However, my opinion on this isn’t relevant or important. CRUK should not launch a nationwide intervention without evidence that it would work – advertising is an intervention, same as intervening with drugs or surgery. There are potentially both positive (reduction in BMI?) and negative effects (increased stigma towards those perceived as obese), and the money spent on advertising could have gone to studying the causes of cancer. Therefore, the campaign should have had evidence to support its use, beyond “we tested it in focus groups”. If they don’t have the evidence, it shouldn’t have happened.

Weight stigma is a problem. It is indefensible if healthcare providers are causing a barrier to access for their healthcare through stigmatising those they perceive as obese. As, of course, is shaming anyone exercising. It’s utterly absurd that anyone should try to make other people feel bad about obesity when they are actively trying to do something about it. The same is true of a lot of shaming, but it feels particularly unjust when people are shamed into not exercising because they are considered too obese to exercise.

Stigmatising obese people will not, and never will, reduce the amount of obesity in the world.

Things I disagree with: the evidence demonstrates weight-loss programs are not effective

I’ll start with something easy.

The NHS has a treatment page for obesity, but it’s general advice, along with the information that GPs can recommend both exercise on prescription and local weight loss groups. Given CRUK has stated obesity is bad, it needs to provide some mechanism for reducing obesity, or it would be completely pointless. So I can see why they would partner with a group that would, presumably (hopefully?), be recommended by GPs. Whether that was necessary is debateable, but I don’t see it as being an immediate problem in and of itself.

More concerningly, the letter states that the programmes are:

The research they cite doesn’t seem to me to support any part of that assertion.

The research is a systematic review and meta-analysis of weight loss among overweight but otherwise healthy adults who used commercial weight-loss programs. The outcome was whether people in the included studies lost more than 5% of their initial body weight. I’ve included a forest plot below, but the conclusion was that, on average, 57% people on a commercial program lost less than 5% of their initial body weight.

Therefore, 43% of people lost more than 5% of their initial body weight, which would seem to me to be evidence that these programs can help people “achieve weight loss”. They don’t help everyone, but that doesn’t mean they aren’t effective – they worked for 43 out of every 100 people! So I disagree that the “evidence demonstrates these programs are not effective”, although I grant that others may disagree.

Some of the biggest studies lasted only 12 weeks, and all but one study lasted less than 1 year. Therefore, this isn’t any kind of evidence for long term effects, or of “maintaining weight loss”. In general, it seems like the longer the study, the more people lost 5% of their body weight. I’d have liked to see a meta-regression on this, to see whether length of study was important, but there wasn’t one. In any case, I also disagree the evidence demonstrates the programs aren’t effective at maintaining weight loss, since that wasn’t tested here.

Finally, the research doesn’t say anything at all about preventing cancer. I would doubt there is much evidence either way for that outcome – if there were, however, it should be cited. 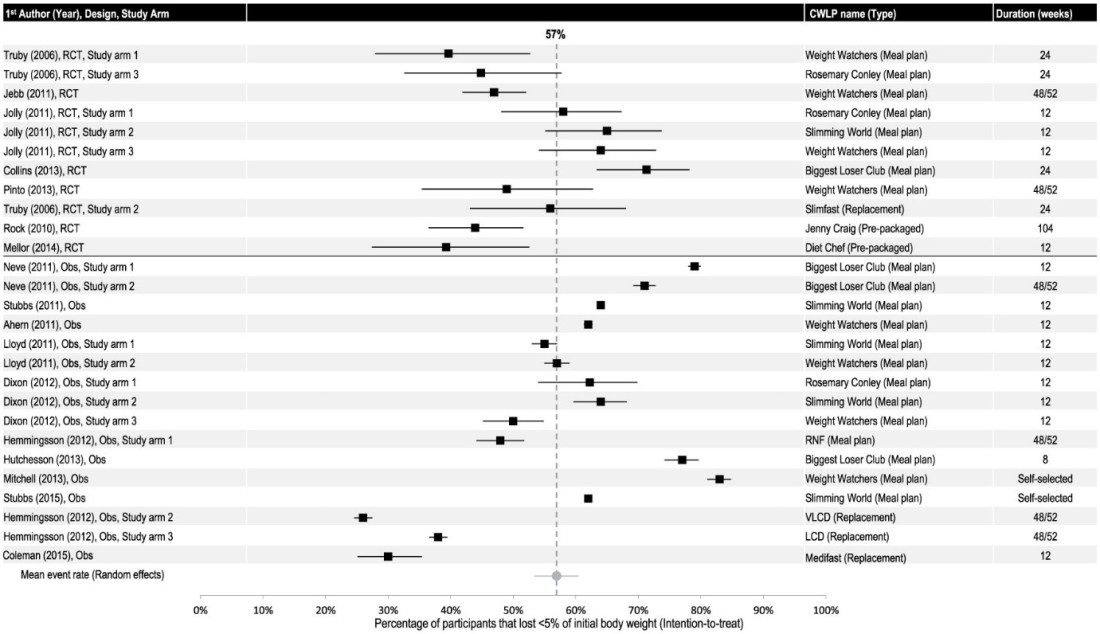 Things I disagree with: smoking is a lifestyle choice

Ok, so this is where things get trickier. 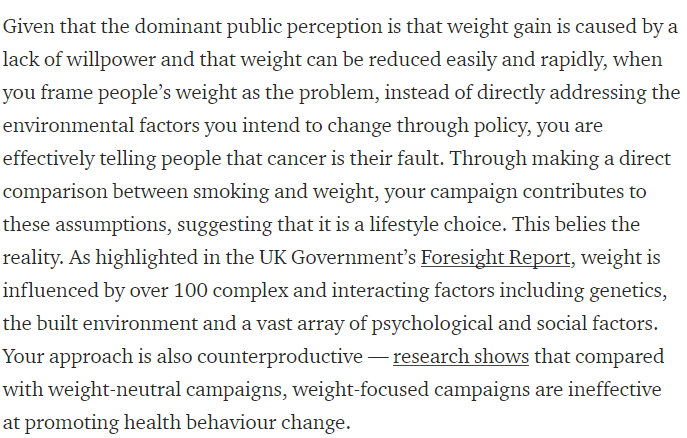 I fundamentally disagree with the approach to this argument. Specifically, this part:

Through making a direct comparison between smoking and weight, your campaign contributes to these assumptions, suggesting that it is a lifestyle choice.

I’m fairly certain this means the authors of this letter, who are criticising CRUK for stigmatising obesity by “implying that individuals are largely in control of and responsible for their body size”, are themselves stating unequivocally that smoking is a lifestyle choice.

I cannot overstate how much I object to this.

I can see why people would think that obesity is different from smoking. Obesity is a consequence of many things, it’s an outcome, not a behaviour or single action that can be stopped at will. Smoking is a deliberate action, where you need to buy cigarettes, light, and inhale them.

But that is completely misrepresenting smoking. Smoking is also a consequence of many things, it’s an outcome as much as a behaviour, same as obesity.

Suffice to say, I strongly reject the idea that smoking is a “lifestyle choice” while obesity is not.

Rather, smoking, like obesity, is complex and multifaceted. If people object to the CRUK adverts solely because smoking is a lifestyle choice, and obesity is not, then I think they are wrong.

There are, of course, plenty of other reasons to object to the adverts.

Things I disagree with: obesity is not a lifestyle choice

I expect this will be an unpopular opinion.

Are people largely in control of their body size?

I don’t know, nor do I know how we could ever test this.

But I know that individual choice affects obesity. To imply otherwise is to say that people have absolutely no autonomy over their own body, over what and how much they eat, or how much they exercise.

I include myself in this. I have been both overweight and obese. I still am overweight. I have experienced weight-related stigma from both family members and strangers, although not at all to the same degree as others will have done. But it’s my choice to eat and exercise the way I do. My environment affects those choices, and I recognise that I am very privileged in that I live close enough to work that I can walk in, I’m healthy enough to go for a run, and I have the time and resources to  choose to eat “healthily” or “unhealthily” (quotes to show how little I care for those definitions), where others don’t have these options.

Sometimes, it’s impossible to eat “healthily”, or to exercise, or to make any “good” choices. But this doesn’t mean that for other people, choice had no part in either gaining or losing weight. It also doesn’t mean that anyone should be judged or stigmatised for making those choices.

I don’t know whether structural change through policy or weight-loss programs that target individuals are better for losing weight, either individually or at a population level.

I don’t know whether obesity is even the core issue – what if the main issue is exercise, and both obesity and poor health are a result of not exercising? Even genetic studies couldn’t tell you that, since obesity may cause poor health by making it more difficult to exercise, both through just it being more physically and mentally difficult, and through weight-related stigma making exercise worse.

I don’t know whether the CRUK advert could be beneficial or detrimental. I’m almost certain it’s not going to do any good, but I’m not psychic. I’m equally certain CRUK doesn’t know what effect the adverts will have, since they are apparently not based on firm evidence.

I don’t know whether it’s weight-related stigma to compare obesity weight smoking – I see smoking and obesity as both consequences of personal choice, the environment and genetics. Saying that, the advert may increase stigma all the same, so it could definitely be destructive.

I know the current Government is extremely unlikely to change policy to promote an environment that reduces obesity. Therefore, I believe the only option people who want to lose weight have is changing their own choices. Some people may benefit from weight loss programs. Others may benefit from lifestyle changes. Others may find it impossible to lose weight. And that’s ok.

While I agree with the letter’s overall message and conclusion, I think the argument could have been limited to the lack of causal evidence of obesity on cancer and the lack of evidence the campaign would have any effect on obesity in this country.

I completely disagree that smoking is a lifestyle choice and obesity is not at all. Both are a mix of personal choice, the environment and genetics.